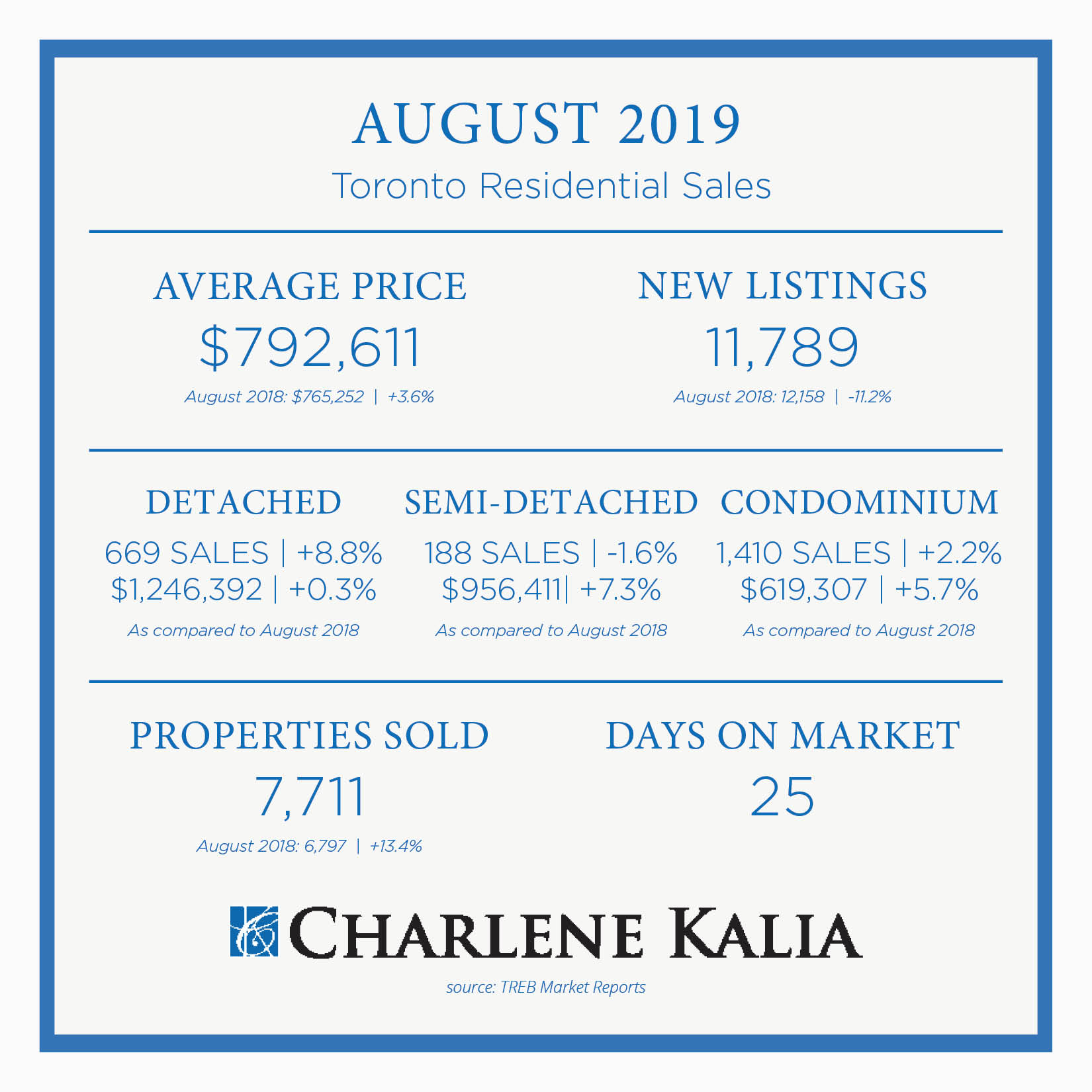 Happily, the Toronto and area residential resale market place delivered August results as anticipated and in a way that ensures
that the resale market will remain stable, sustainable and accessible. The only concern is inventory, particularly in the City of
Toronto.

Sales volumes were up by over 13 percent compared to August 2018, while the average sale price increased by 3.6 percent, right
in line with the increase in wages. In August wages for permanent employees in Canada increased by 3.8 percent year-over-year.
Considering that sales volumes are still playing “catch-up” from 2016 and 2017 numbers, a 13 percent increase compared to last
year is modest.

In actual numbers 7,711 properties were reported sold in the greater Toronto area. Last year 6,797 were reported sold. The
average sale price came in at $792,611 compared to $765,252 for the same period last year. It should be noted that the increase
in sales volumes was concentrated in Toronto’s 905 region. Of the 7,711 reported sales 5,158 were primarily located in Halton,
Peel, York, and Durham regions. Only 2,553 were City of Toronto properties. This number is almost identical to the 2,550 sales
that took place in the City of Toronto last year. As these numbers indicate the City of Toronto made no contribution to the 13
percent increase in sale volumes across the entire marketplace.

Condominium apartment sales were practically flat in August (2.2 percent higher than last year). Condominium apartments have
not only become pricey ---- in the Central core of Toronto where most condominium apartments are located and sell, the average
price is approximately $700,000. With mortgage stress testing a buyer of a condominium apartment would need household
income substantially higher than $100,000 annually, and if their mortgage financing is high ratio at 10 percent equity, at least a
$70,000 deposit. It is these factors that ultimately will keep average sale prices from increasing substantially more than 3 percent
year-over-year for sometime to come, even if the Bank of Canada reduces its overnight lending rate, which its wisely refrained
from doing at its meeting in early September.

Although condominium apartments are still selling briskly all condominium apartment sales took place in 22 days (the rate
in the overall market place was 25 days) and at 100 percent of their asking prices inventory levels are down. Last year there
were 2,307 active listing at the end of August. This year only 2,117. The same is true for the overall market. Last year there were
17,864 active listings available to buyers in the greater Toronto area, this year that number has dropped to 15,870, an 11.2 percent
decline. This not good news for buyers, even those who have the financial means to comfortably afford Toronto real estate prices,
a serious concern going forward.

The high end of the residential resale market also continued its slow recovery. In August 159 properties having a sale price of
$2 Million or more were reported sold. Last year 144 were reported sold, an increase of 10 percent, a number that lags the over
market place increase of 13.4 percent. As discussed in previous reports the average sale price of luxury properties out-distanced
the overall market place in 2016 and early 2017. That sector of the marketplace is still correcting, however that process is now
almost complete. In August the sale of detached properties (average sale of $1,246,392) increased by 0.3 percent compared to
last year, one of the few year-over-year increases in the City of Toronto over the last few months.

Given some recent economic numbers there is nothing that would indicate that the prevailing resale market place will change
throughout the remainder of 2019 and into 2020. As indicated above, wages rose by 3.8 percent in August; 81,100 new jobs were
added to the Canadian economy, 23,900 of those being full-time jobs; and the Bank of Canada did not lower interest rates. If the
Canadian economy continues to create jobs throughout the balance of 2019, we should make it to year-end with out the Bank of
Canada reducing rates. All of this economic activity ensures a stable real estate market going forward, with modest increases in
sale volumes and 3 to 3.5 percent increases in average sale prices.

So what is an astute buyer and seller to do in this extraordinary real estate environment? I believe the answer is to simply secure your position with timely information, in-depth knowledge, and an experienced professional. And choose an agent with a brokerage behind them that understands the importance of service excellence.

This entry was posted on September 11th, 2019 by Charlene Kalia | Posted in General