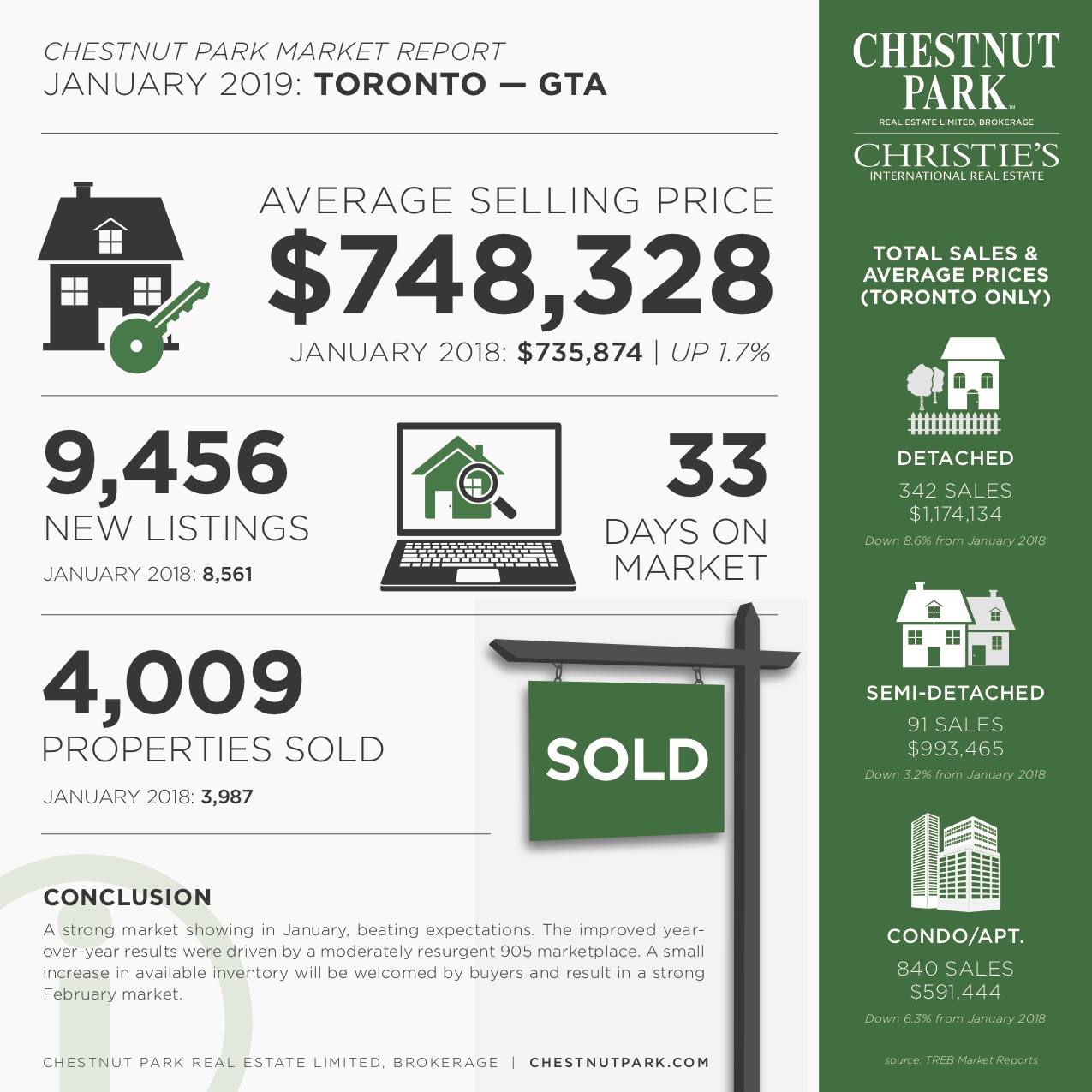 2019 started positively, surprising many who were anticipating the double-digit declines that the Toronto and area residential resale marketplace delivered in November and December of last year. Although moderate, January delivered increased sales volume and average sale prices compared to January 2018.

There were 4,009 sales reported in January, a less than 1 percent increase compared to 2018, but an increase nonetheless. Encouragingly, January’s positive results were due to an improvement in Toronto’s 905 region. The Greater Toronto Area was dramatically impacted by the provincial foreign buyers’ tax and has lagged behind the Toronto 416 market since the spring of 2017. In January, the 905 region’s sales were up by 2.5 percent compared to last year, while the City of Toronto’s sales declined by 3.5 percent. The decline in City of Toronto sales was not caused by a decline in demand. Rather the decline was driven by a chronic shortage of supply. At the end of January, the Greater Toronto Area had 2.7 months of inventory, whereas the Cityof Toronto found itself with only 1.9 months of inventory. The difference in inventory is also reflected by the fact that sales inthe 905 region took place in 33 days (an average), yet it took only 29 days for all properties in the City of Toronto to sell.

January’s average sale price came in at $748,328, an increase of almost 2 percent compared to last year’s average sale price of$735,874. This is exactly the kind of increase that reflects a stable and sound market, not the double-digit monthly increasesthat became common place in 2016 and early 2017. Double digit increases in average sale prices become unsustainable and unfortunately can lead to painful corrections.

Condominium apartments continue to be the most affordable housing form, but again, because of supply, average pricescontinue to increase. In January, the average sale price in the City of Toronto increased by almost 9 percent to $591,444. In Toronto’s central districts, where most condominium apartment sales are located, the average sale price came in at $677,997, a 10 percent increase compared to last year’s prices. In January, there were only 1,738 condominium apartments for sale in the City of Toronto and only 1,093 in Toronto’s central districts where most sales take place. This shortage of supply will

continue to put upward pressure on prices, constrained only by affordability.

This entry was posted on February 11th, 2019 by Charlene Kalia | Posted in General