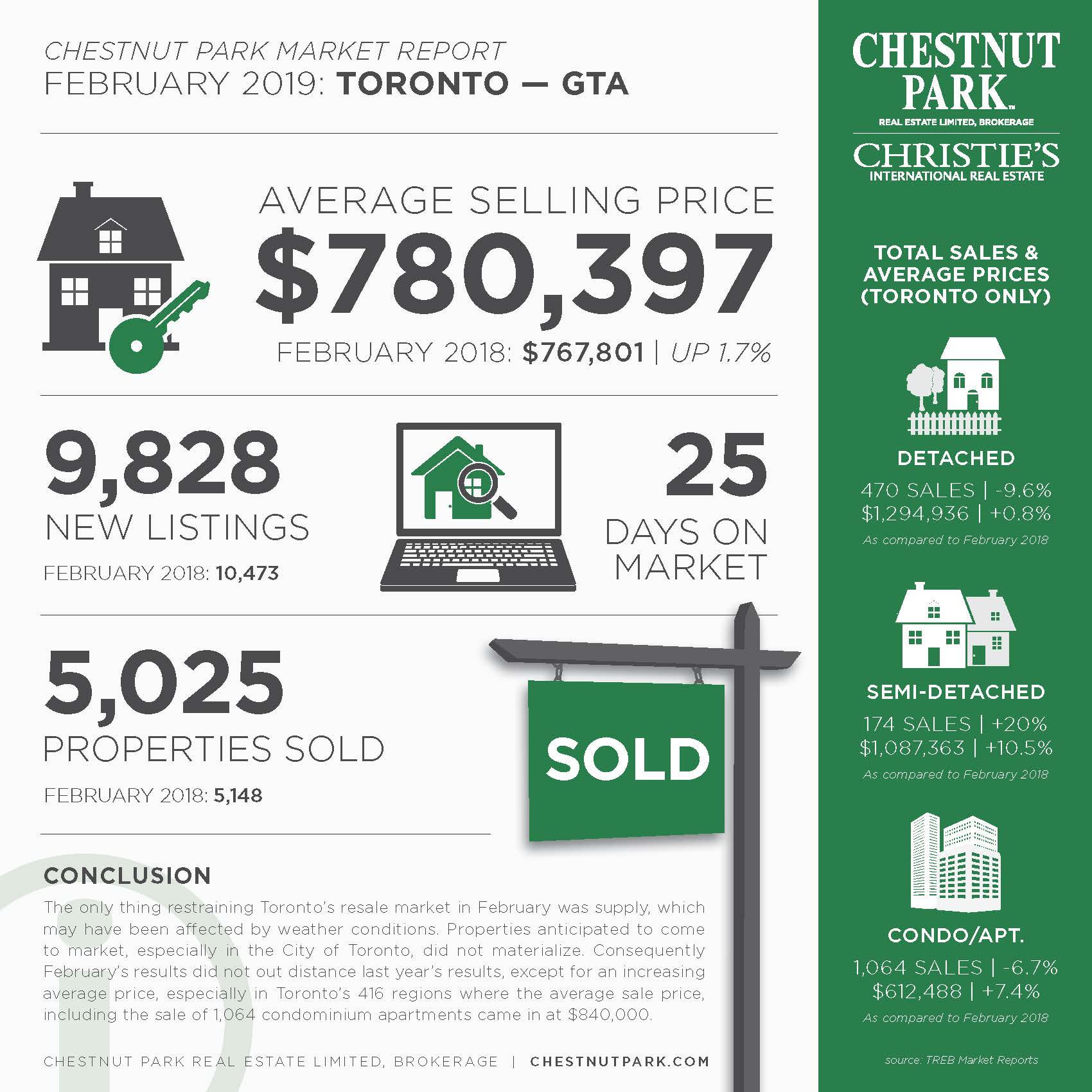 February results were expected to continue what we saw in the first month of 2019 -- modest growth in sales and average sale prices. That didn’t materialize. I have generally not regarded the weather as having a material impact on the residential resale market, but this February may be the exception.

This February we saw a modest decline in sales compared to February last year. This year 5,025 properties were reported sold, a small decline of 2.4 percent compared to the 5,148 properties reported sold in February 2018. The reason for this decline, particularly in the 416 regions, was simply due to a lack of inventory. Since January saw a year-over-year increase in supply, the only plausible explanation is the weather. February brought three major snow storms, and effectively paralyzing the greater

Toronto area on three different occasions, with snow mounting to shocking levels. It is not surprising that properties did not come to the market.

It is clear that demand is present and because of supply shortages it is beginning to pent up. In February the properties that sold caused the average sale price to increase for the second month in a row. All properties sold for $780,000 in February, almost 2 percent higher then last February’s sale price of $767,000.

It is concerning that the last truly affordable housing type, condominium apartments, is rapidly becoming unaffordable. In February all condominium apartments sold in the City of Toronto (on average) for $612,000. In Toronto’s central districts, where most condominium apartment sales take place, the average sale price came dangerously close to $700,000. With the increase in mortgage interest rates and the implementation of mortgage stress testing, these prices are making it very difficult for first time buyers to enter Toronto’s real estate market.

At the other end of the real estate spectrum, higher end property sales continue to strengthen. In February 118 properties having a sale price of $2 Million or more were reported sold. This compares favorably to the 126 sold last year. It is interesting to note that condominium apartments accounted for almost 10 percent of sales in this price category.

As we move into March and improving weather conditions, we anticipate more properties coming to the market to meet demand. It would appear that buyers have accepted higher interest rates and mortgage stress testing but are frustrated by their inability to find suitable properties for sale, especially semi-detached properties in the City of Toronto.

This entry was posted on March 12th, 2019 by Charlene Kalia | Posted in General